Gulfstream G200 is a twin-engine business jet. In the year of release, he had the largest passenger cabin in the super-midsize class.

Initially, the aircraft was designed by specialists from Israel Aircraft Industries (IAI). His name was Astra Galaxy. They began its development in the early 1990s, and announced the program in 1993. They planned to bring the model to the market by 1996, but they were only able to present it in 1997, as they did not manage to meet the deadline.

Galaxy first flew in December 1997. A year later, he received certification from the US and Israeli air agencies, and a year later, deliveries began.

In June 2001, Gulfstream Aerospace bought the Galaxy at a price of $330 million. The aircraft was renamed the Gulfstream G200. The production of a private business jet continued until 2011, during which time 250 units were produced.

Prior to purchasing the Galaxy, Gulfstream only produced large-cabin jets. The G200 was their first super-midsize aircraft.

Gulfstream G200 became the second largest aircraft on the market among the super-midsize aircraft. Before him, in 1995, the Falcon 2000 from Dassault entered the market.

In 1999, the G200 had many technical problems. It was too heavy - the main working weight was above 9340 kg. In addition, there was a lot of noise during takeoff and landing, problems with electronics, fuel supply, faulty avionics and flight control systems.

By 2001, the jet had been made lighter, and the Gulfstream had developed a new interior for the updated model. And also the company has improved its functionality. Reduced the noise level inside the cabin. Therefore, when talking on the phone, the passenger may not raise his voice so that the interlocutor can hear him.

In 2006, the new Gulfstream G150 was announced and certified to the FAA's stringent new noise standards.

In order to keep within the budget IAI used thin wings. They provide good cruise economy, but interfere with takeoffs and landings on short runways. This was corrected by the introduction of Krueger flaps.

Now a small runway is enough for him, which expands the geography of flights. The course of the Gulfstream 200 is smooth and stable even in turbulent zones. And he quickly gains speed and height.

After the upgrade, the G200 transport business jet fits into the noise restrictions of many airports. And instead of ventilation, it has a built-in fresh air supply system, which makes being on board an aircraft more pleasant. The maximum flight duration is 7.5 hours.

At the time of the Gulfstream 200's release, its cabin was the largest in the super-medium category. The ceiling height is 191 cm, so it is comfortable for tall people to walk on the plane. There are 2 passenger zones, which are designed for 11 people.

To the rear is a washroom with sink and biochemical toilet. Through it you can get into the voluminous luggage compartment during the flight. And in front of the kitchen, equipped with a stove, coffee maker, bar, refrigerator and other amenities.

In the main part of the cabin there are comfortable large armchairs and a three-seater sofa. The interior is conceived in light colors. This creates a pleasant atmosphere for traveling on business or leisure.

The Gulfstream 200 easily covers a long journey with heavy luggage. A flight from Saratov to Beijing on a private jet Gulfstream 200 costs from 30,000€. The price usually includes snacks, a bar and stewardess services. It is also a popular route. Moscow - Maldives Without stops.

Interesting fact
In 2007, Gulfstream Aerospace was the first in the history of aviation to fly a private jet with improved vision and vision at the same time.

In 2005, Gulfstream and IAI engineers began developing an improved model to replace the 200th Gulfstream. It has improved the interior, technical and electrical characteristics. The volume of the cabin and luggage compartment was increased.

How many hours can a Gulfstream G200 be in the air?

The maximum flight time for this model is 7.5 hours.

What is the air conditioning system in the cabin?

The cabin is 100% fresh air supply, instead of recirculation.

What cabin options does the Gulfstream 200 have?

The aircraft has three cabin modifications:

What is the maximum weight allowed for luggage?

Up to 1200 kg of luggage can be placed in the luggage compartment with a volume of 4.2 cubic meters.

What is the takeoff distance of the Gulfstream G200?

The takeoff distance is only 1855m. This allows you to stop at airports with short runways.

What is the cruising speed of the jet?

Can I get into the luggage compartment during the flight?

Yes, you can access the luggage compartment through the toilet room. It is located in the tail section of the aircraft.

How many passengers can be on the plane at the same time?

A maximum of 11 people can be in the cabin. But the optimal number will be 8 passengers.

How to write the name of the aircraft in English?

It is correct to write Gulfstream as the name of a warm current. Some mistakenly spell golfstream.

Where can I rent or buy a plane?

The Gulfstream G200 business jet can be rented or purchased through And Now Pleasure LLC.

Gulfstream - a detailed overview of the aircraft manufacturer

Gulfstream (Gulfstream) G150 - in detail about the legendary business jet 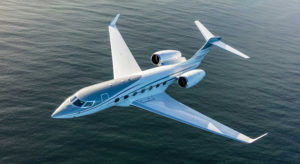 Gulfstream G650 - all the details about the legend of business aviation 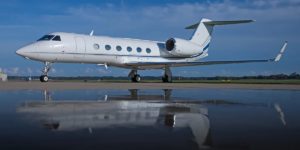